My friend, a Broncos fan, asked me if I could make her football-themed cookies for her Superbowl party this weekend. I was more than happy to help. 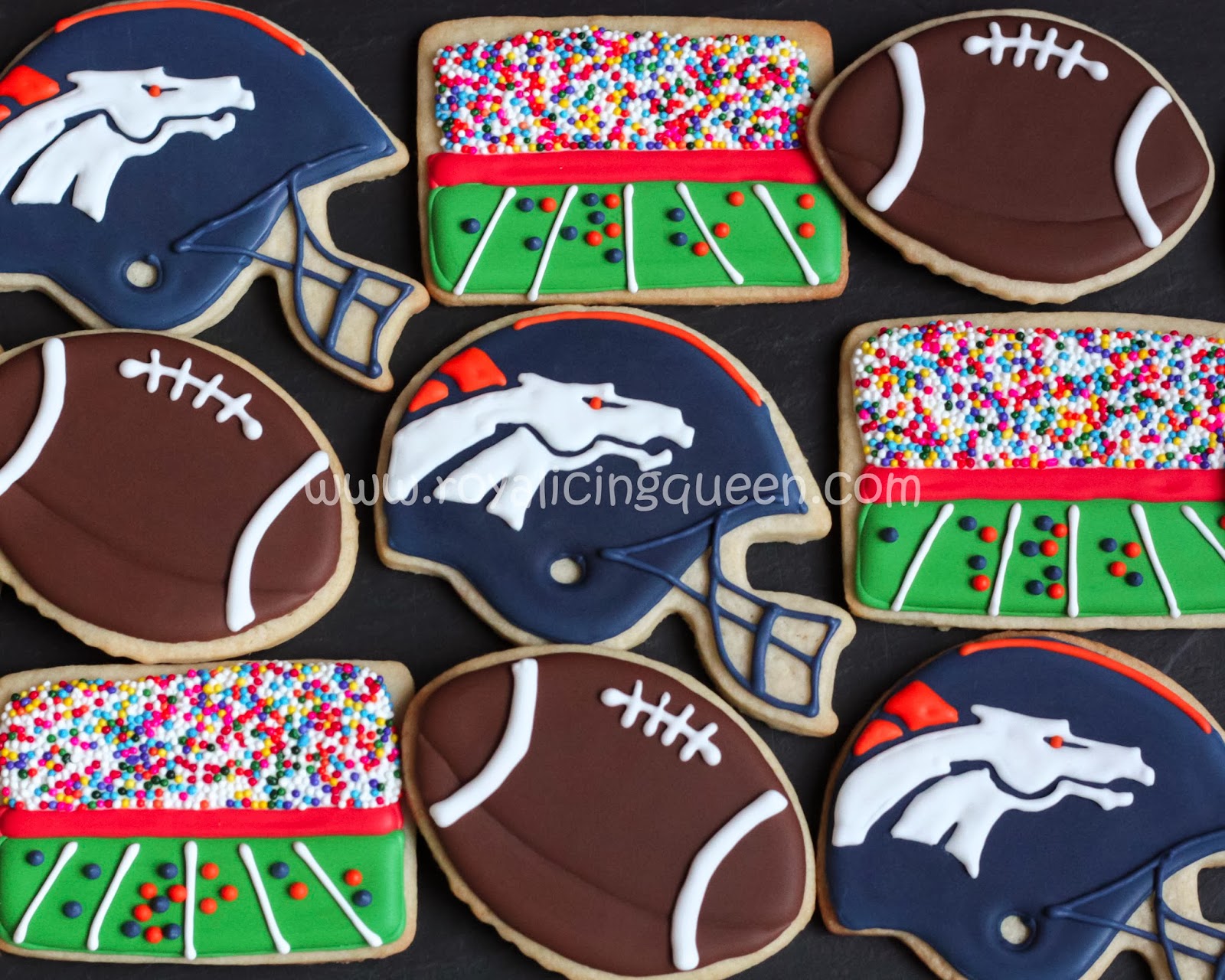 I live just outside Seattle and making these might be enough to get me kicked out. I'll have to make Seahawks cookies next.
Posted by A. at 7:48 PM No comments:

With pink hearts and flowers for Valentine's Day. 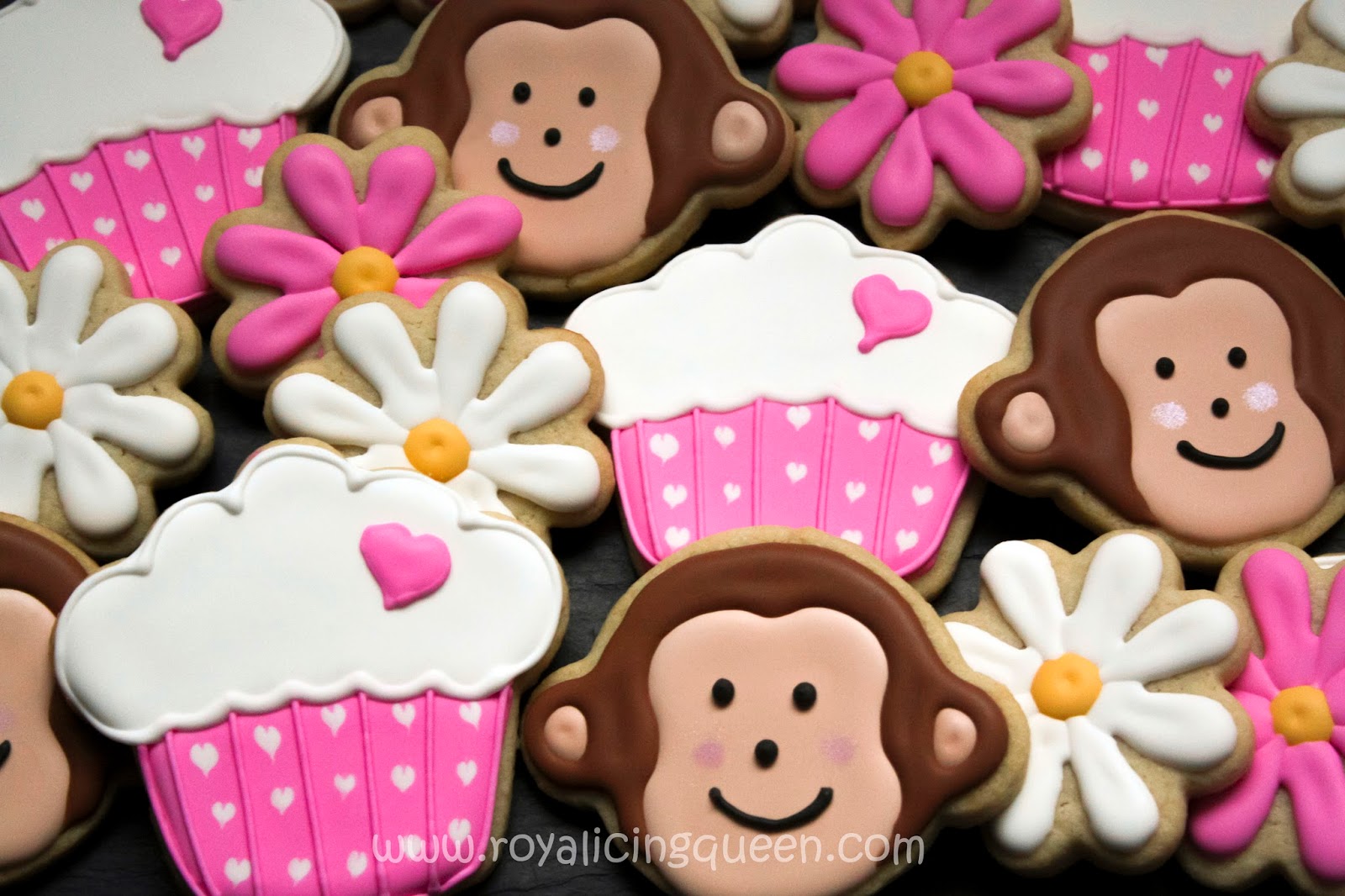 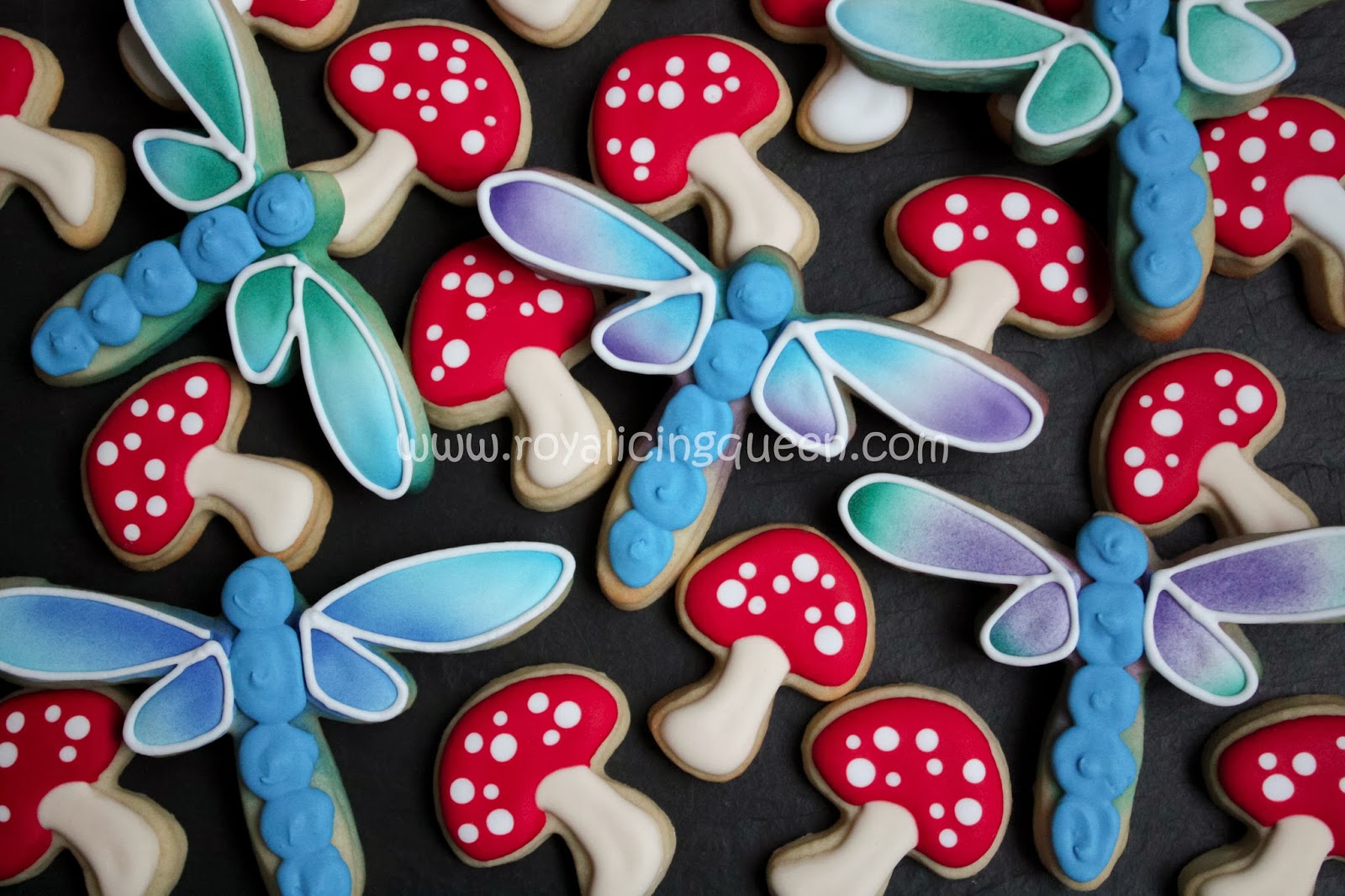 I had some leftover dough when I was making the Ninjago cookies this week so I decided to make some extra cookies and experiment with something new. I had gotten a Hedgehog cookie cutter as a Christmas gift that I hadn't used yet and I thought this would be a fun one to try. I liked the idea of making a cutesy hedgehog but also one that had the realistic texture of a hedgehog. Fortunately, royal icing is very versatile and can be used to create so many different effects. I used stiffer, outline consistency royal icing and a Wilton #2 tip to make the hedgehog's quills. To make the hedgehogs look more cutesy, I turned to Pinterest for inspiration where I found many hedgehogs cookies made with flowers and bows placed near their ears. I had also recently purchased some orchid pink luster dust that I hadn't yet had a chance to use. I used a slightly damp rounded paintbrush to dust this on their cheeks and give them their rosy complexion. 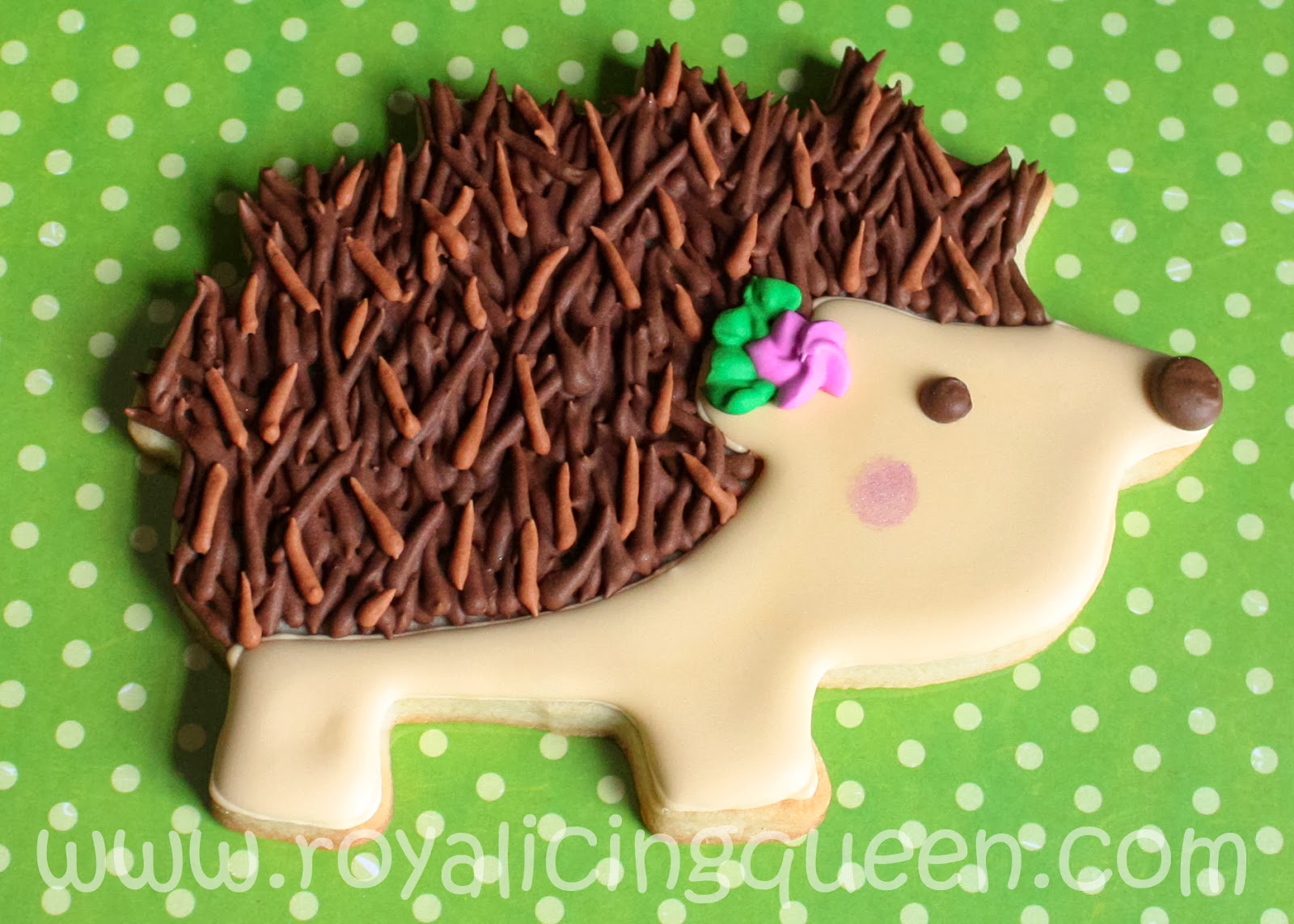 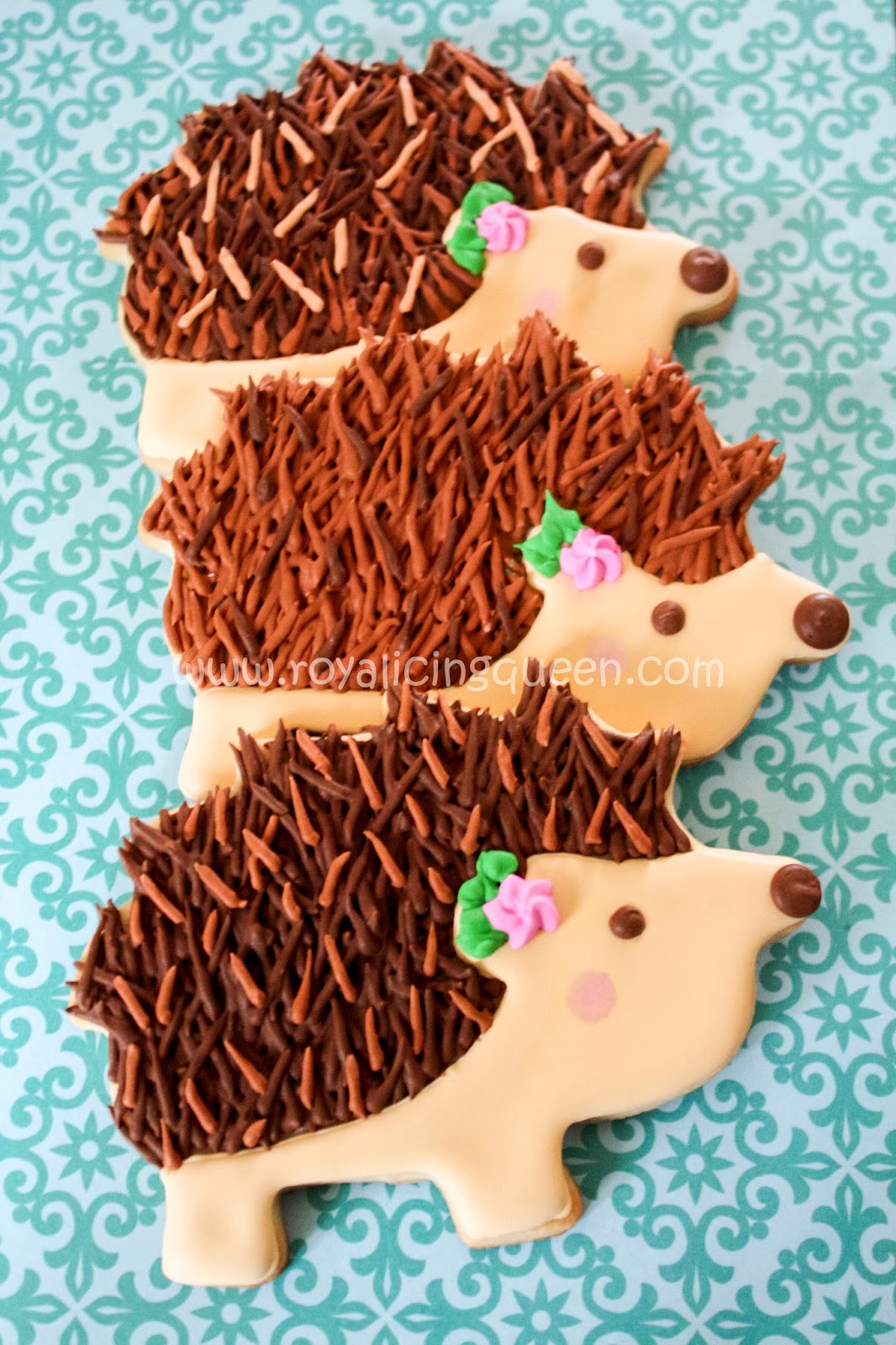 I also experimented with layering different shades of brown when I was making the quills. These cookies took a lot of individual quills. It was time consuming work, and, if I were to make these again, I think I would flood the upper portion of the hedgehog with dark brown royal icing first so that I wouldn't have to be as concerned about layering the quills and having the lighter cookie shade showing through. Chocolate roll-out cookies would work well for this design too.
Posted by A. at 1:28 PM No comments:

Email ThisBlogThis!Share to TwitterShare to FacebookShare to Pinterest
Labels: Hedgehogs

I made these cookies for a friend's son's 7th birthday party. I followed Sugarbelle's tutorial fairly closely. I used the Wilton Comfort-Grip Egg cookie cutter and trimmed off a couple of pieces from the bottom to give them this shape. Instead of piping on frosting for the eyes, I cut out my own stencil and airbrushed them on with black food dye. 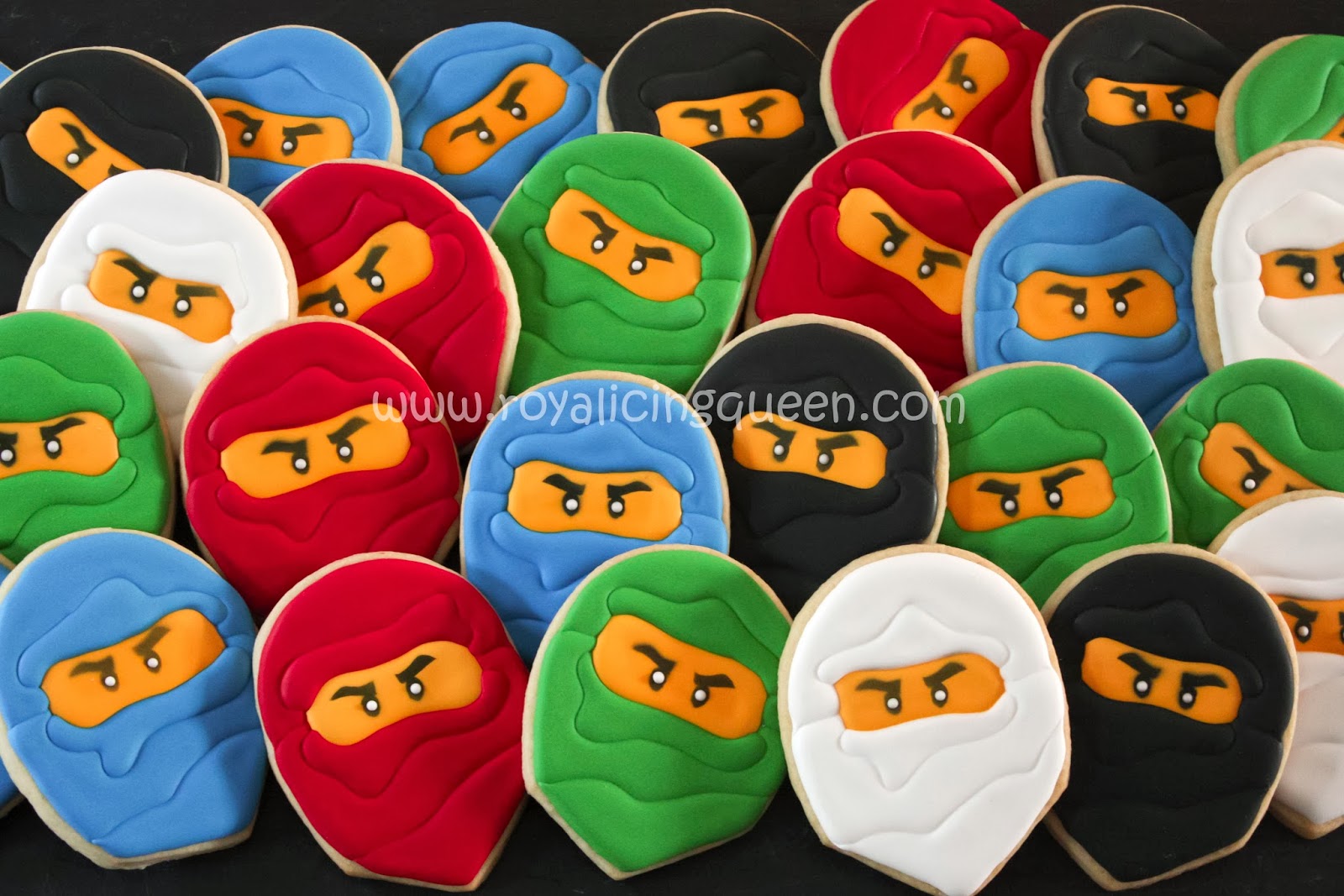 When my older daughters saw me making these cookies, they got very excited. They immediately insisted that I make "the Gold Ninja." I had no idea what this was, but it wasn't hard to figure it out. It's exactly what it sounds like. A gold ninja. So I decided to give making one a try. I made on Ninjago character that looked just like the others except that it's base color was a yellowish brown. Then I airbrushed some gold sheen food dye onto the cookie. This was my first attempt at using my airbrush to evenly cover a larger surface. I wished I had made more brown Ninjago cookies to use for practice. I had only made two so I didn't have much room for experimenting, but I think it turned out well enough. 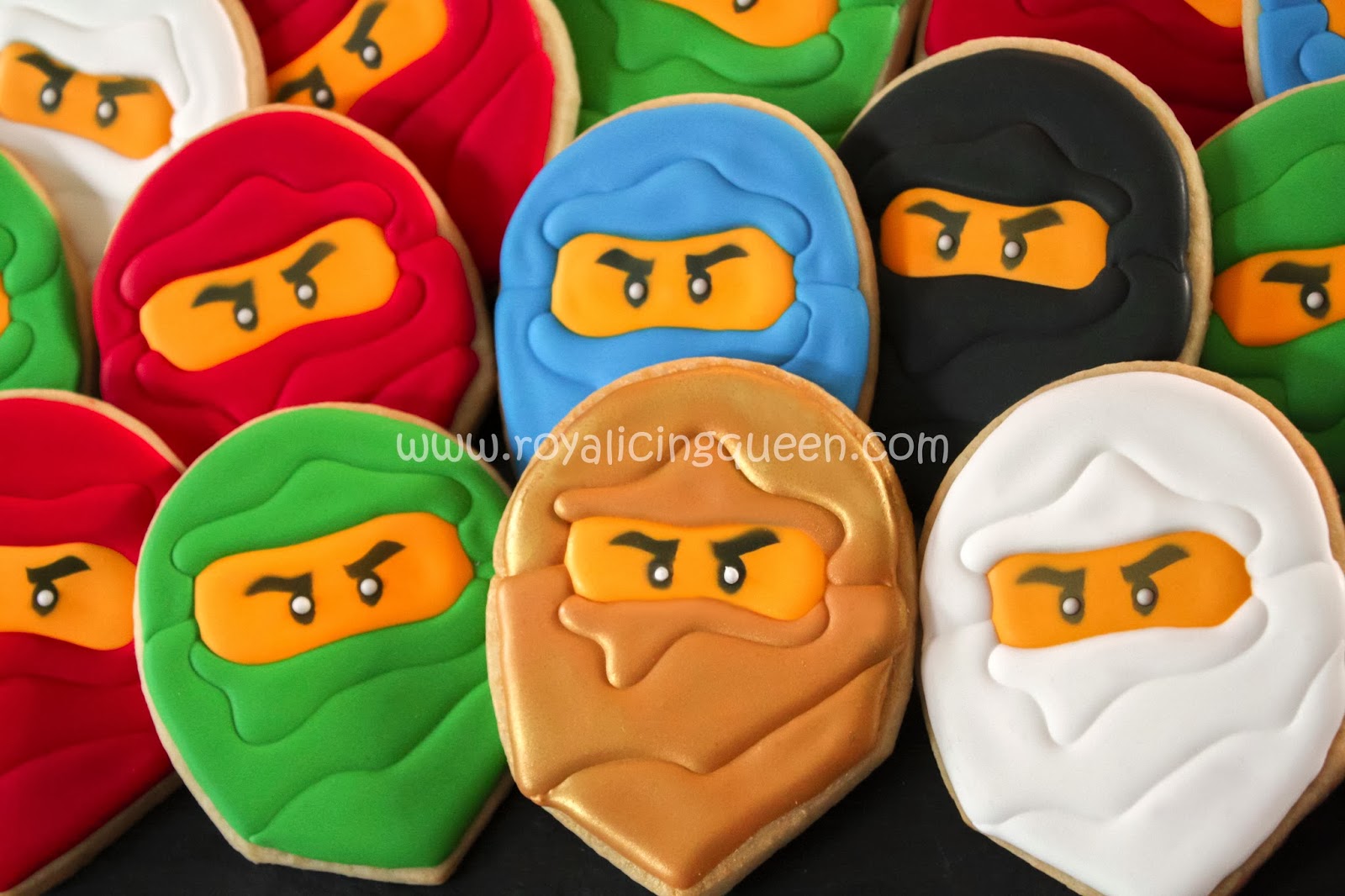 I sent one gold ninja along with all the others for the birthday boy.
Posted by A. at 6:49 PM No comments: